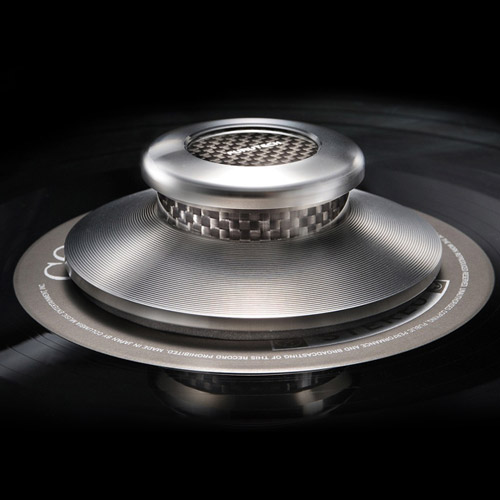 Grand Prix racing‘s single focus: Testing the absolute limits of technology and performance for that final 10th of a second that makes the difference between victory and defeat. Furutech builds each and every cable in their line the same way; optimized engineering solutions applied to advanced materials and processes, backed by utterly meticulous build quality.

The beautifully finished precision machined nonmagnetic stainless steel base and top modules are girdled by a layer of damping carbon fiber. The bottom surface is covered with 16 concentric cushioning grooves made of an extremely effective Piezo Electric damping material.

The Piezo Effect and Your Valued LPs

Piezoelectric effects are the key. Furutech’s employs these nano-sized polycrystalline ferroelectric ceramic particles exhibiting electro-generative properties (mechanical pressure creates an electrical charge) with carbon powder that exhibits thermal-conductive characteristics that interacts with the electrically charged ferro-ceramic particles converting their energy into heat that’s conducted away and released from the surface of the material and in doing so making the connection between electrical and mechanical oscillation. The mechanical and electrical damping effects occur while “interconverting” thermal, mechanical, and electrical energy acting as the perfect weighted surface for your LPs.