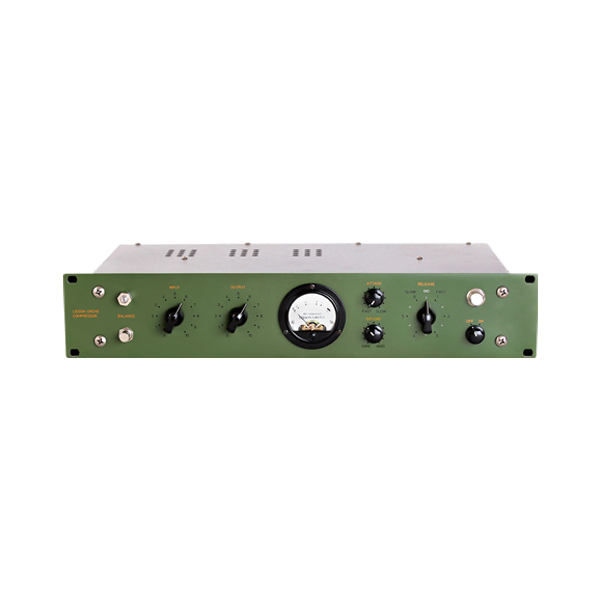 The Lisson Grove AR-1 is a vintage style tube compressor based on the classic Altec compressor that was used intensively in the '60's.

However, the AR-1 has some modifications. Some of which are in the circuit and some functional. The quality of each component in the units is of the highest possible standard, and the unit is hand built from top to bottom

The Lisson Grove AR-1 has been built from a love of the sound of a bygone era . We hope you recognize that very familiar sound.

Also self explanatory, but if you pull the pot the compression is bypassed, it is not a hard bypass, and you retain the sound of the unit without the compression. Release Times320mS500mS800mS1.25S2.3S O/P LoadThis Pot adjusts the output impedance of the unit going from 600 ohms in the far right position, to 200 ohms ( Dark ) in the far left position.

We put this on our unit as the original had an output of 200 ohms but we felt that was too dark for some uses so made it possible to have a variable tone without adding anything to incongruous to the circuit. The 'Infinity' controlIn between each of the 6 recovery settings is the Infinity position which is, in effect, an extremely long recovery time. There are a variety of uses for this feature, a useful one being the ability to 'prime' the unit before a take. This is done by placing the compressor in a 'Infinity' position ( one click up or down from the desired setting ), having the artist play or sing a note before recording, then switching in the desired release time once things were under way.

Yet another use of 'Infinity' would be to prevent an increase in gain during silent passages. We have also added a quarter inch jack on the back, to enable a footswitch control, for hands free operation.

BalanceThis provides an easy way to balance out the two sides of the gain reduction valve, thus minimizing distortion and feed-through thumps. When you press the push-button,it is then a simple matter for the engineer to adjust a small trim control until the pulsing sound is heard at its lowest level. This is a very practical for balancing out the gain reduction valve.

User Quotes"I love the Lisson Grove AR-1 . It's rare to find a new compressor that has the bounce and character of a 'classic' vintage unit but also the reliability of a new one. I have found it to be a very musical tool for mixing but also a great creative tool when I'm after something more adventurous.. the perfect thing to turn to for bringing life and edge to sounds. It cooks!"Nigel Godrich - Engineer/Producer.Credits include: Radio Head, Beck, REM, Air, Zero 7, Paul McCartney

"Today I put the AR-1 on the vocal, yesterday I put it on the acoustic and the day before I put it on the bass. If i'm gonna spend good money on a compressor it can't be a one trick pony. There's a few ponies running around in this baby."Michael Brauer - ProducerCredits include: Bob Dylan, Rolling Stones, Coldplay, The Vaccines, Shakira, Doves